The two gasholders on the Regents Canal are under threat from a development by St William Homes (Berkeley Homes and National Grid). The smaller No. 2 gasholder was built in 1866, the larger No. 5 gasholder in 1888-9. So far, 1562 people have signed the EEWG petition to St William Homes, for which many thanks. However, we need many more signatures. 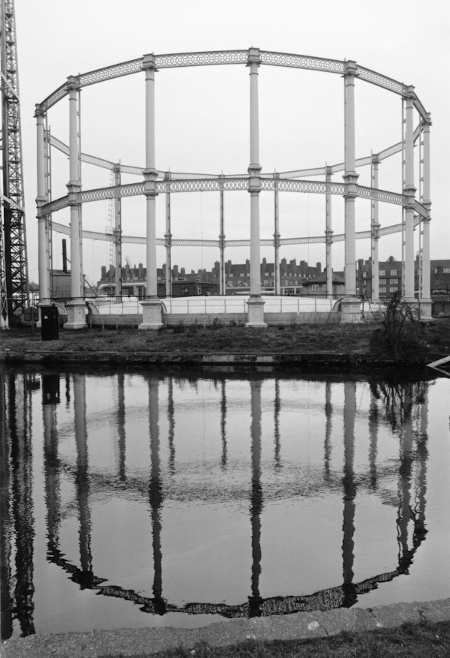 Photographed by Malcolm Tucker in 1973

This is the second-oldest surviving gasholder in the world and we want its columnar guide frame (which is the earliest and most ‘classical’ surviving example of its type in the world) retained and conserved in situ on its original in-ground brick tank (being retained by St William) for reuse as a ‘gasholder park’.

NB could the size of the bullet balls be larger? 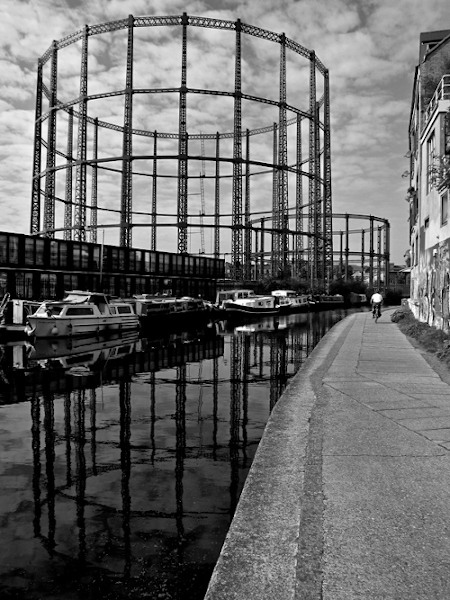 Photographed by The Gentle Author in 2014

This is one of the few surviving gasholders built by the world-renowned local firm of Samuel Cutler & Sons of Millwall and we want its lattice guide frame (which is as built 1888-89, whereas the Grade-II-listed 1879 gasholder at Kennington was extensively and unsympathetically altered 1890-1891) retained and conserved in situ on its original in-ground concrete tank (being retained by St William) for St William’s two proposed blocks (to be built inside the retained and conserved guide frame, like the Alliance gasholder at Dublin).

NB The insurance and redecoration costs for both conserved gasholder guide frames (and their relocated roller carriages) could be included in the annual service charges applied to the non-affordable flats.

The No.2 and No. 5 gasholders at Bethnal Green are the only surviving in-situ historic gasholders on the Regent’s Canal: the so-called ‘gasholders’ at King’s Cross are just re-located gasholder guide frames erected on new pile-driven foundations around new blocks of flats.

The No. 2 and No. 5 gasholders are also the only surviving adjacent gasholders in London and possibly England with excellent and complementary examples of the two main types of 19th century gasholder guide frame.

Given the way that the few listed gasholders are being reduced to relocated guide frames on new foundations, and the ongoing disappearance of non-listed historic gasholders, the No. 2 and No. 5 at Bethnal Green are likely to become the only surviving in-situ historic gasholders in London, which was the birthplace of the gas industry.

Sign the Petition and help save the Bethnal Green Gasholders as a memorial to the London Gas Industry, with reuses which would "sustain and enhance (their) significance" and "be consistent with their (long term) conservation" (National Planning Policy Framework para 185a)

* For information on the in-situ conservation costs (or repair costs) see page 11 and Appendices F and G in the Feasibility Study (Revision F) (link) prepared by Paul Latham of The Regeneration Practice. The more expensive and less conservative method of off-site conservation for the so-called ‘retention’ of the gasholders would, according to St William, cost “in the region of £10m per gasholder” (LBTH response to Main Matter 10 August 2018).

Actual costs for the development at Bethnal Green have still to be worked out and much depends on Craddy Pitchers Ltd report on the condition of the two guide frames. They are consulting engineers (previously involved in the off-site conservation of gasholder guide frames at King’s Cross and currently at Kennington), and EEWG fears that their forthcoming report for Bethnal Green will serve as a justification for the unnecessary and expensive off-site conservation of the No.5 guide frame and the demolition of the No.2 guide frame. 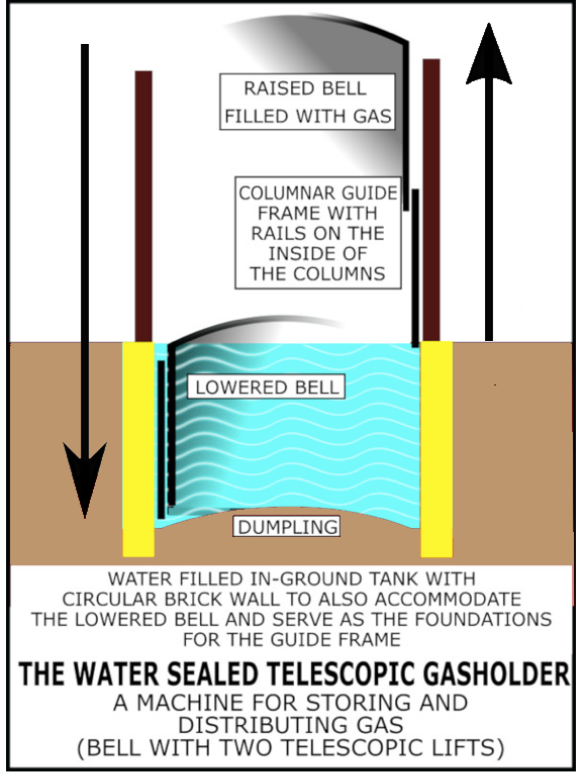 The cross-sectional drawing shows the three main parts of a traditional gasholder (in-ground tank, bell and guide frame, which are mentioned in the petition and the reasons); and indicates the up and down movements of the bell as it filled with gas and emptied as the gas was forced and drawn into the gas mains.

There were two adjacent vertical pipes (between the in-ground tank wall and the lowered bell) with open ends above the level of the water in the in-ground tank. Gas was pumped via the inlet pipe into the domed part of the bell’s inner telescopic lift, causing the lift to rise; and the stored gas passed into the gas mains via the outlet pipe.

The up and down movements of the bell were guided and supported by the guide frame with its guide rails on the insides of the columns (or the standards in a lattice girder guide frame, like the No. 5 at Bethnal Green). The rim of the domed part of the bell’s inner telescopic lift had roller carriages with double-flanged rollers which ran up and down the guide rails; and there were flanged rollers on the sides of the lifts below the carriage rollers.