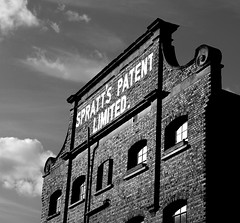 As fully detailed in Newsletter No. 8, the Council is consulting on its proposed new Limehouse Cut Conservation Area. This supplement contains Tom Ridge’s email letter on the draft character appraisal and management guidelines. Please read the email letter (in conjunction with the draft document) and write or email by 29 May should you wish to support Tom Ridge’s formal requests to:

I am writing in support of the proposed new conservation area and to welcome the improved and extended character appraisal. Also to formally request that the former Spratt’s Biscuit Works and Violet Road Bridge are transferred from the Langdon Park Conservation Area to the new Limehouse Cut Conservation Area. Although included in a recent extension to the Langdon Park Conservation Area, the works and the bridge are separated from the latter by a railway embankment. Furthermore, the works was supplied mainly by barge, and the canalside elevation still bears evidence of the loading doorways and three examples of the company name.

And to formally request that the former Spratt’s Biscuit Works and the following buildings are locally listed, and appear as such in the final document to be approved by Cabinet:

The four buildings in Dod Street are described in the character appraisal and should more information be required for local listing, it may be found in my January 2009 report. The warehouse at 24 Gillender Street is fully described in the character appraisal; and there is plenty of information about Spratt’s at the Tower Hamlets Local History Library & Archives. However, the situation at 23 Gillender Street has been complicated by the 1994 English Heritage delisting of the “four-storey” building, in the mistaken belief that it was a boiler house.

As Malcolm Tucker states in his 12 April 2010 letter, only the two-storey parts are still listed. My research indicates that the “four-storey” building was built by a local builder as a new still house for the Four Mills Distillery, together with adjacent two-storey spirit store and two-storey bonded warehouse. Until its adaptation as a warehouse, the “four-storey” building was a windowless building providing a three-storey-high hall for distilling apparatus, heated by steam for the production of raw alcohol from fermented malt. The steam was raised in a single-storey boiler house with three boilers (demolished) served by a 140ft hexagonal chimney shaft (truncated). Although floors have been inserted in the three-storey-high hall and window openings inserted in the formerly blind tall recessed bays, this remarkable building is one of the few surviving representatives of the formerly important London distillery industry. Its national importance is enhanced by the complete survival of its adjacent two-storey spirit store and the partial survival of its two-storey bonded warehouse. As English Heritage is unlikely to be persuaded to reverse the 1994 delisting, I sincerely hope the Council will add the former still house to its local list, together with the other five named buildings.

As designated heritage assets, the former still house (with spirit store and bonded warehouse walls) and the former warehouse at 24 Gillender Street are more likely to be sensitively adapted for reuse. Especially now that such an excellent development is proposed for Sun Wharf (site currently occupied by three single-storey warehouses on the peninsula between the River Lea and Bow Creek).

I cannot end this section of my letter without reference to the totally disrespectful development right next to the listed former Bromley Public Library at 45 Gillender Street. Not only does it seriously harm the setting of the listed building but it harmed the setting of the original Limehouse Cut Conservation Area and will harm the setting of its proposed replacement. Clearly, your planning colleagues are going to need far more guidance than the fine words contained in the summary on page 19. In this respect, I am disappointed to see that the preparation of “a design code for sites adjacent to this waterspace” is still no more than a suggested priority for action (page 31). Given that the appraisal acknowledges past failures (pages 5 and 17), it is imperative that, in addition to the fine words in the summary, there is a clear statement on the necessity for all new developments in and adjoining the boundaries of the conservation area to fully respect the setting of the landsides as well as the watersides of the proposed Limehouse Cut Conservation Area. In this respect, I for one would ask that the preparation of a design code for sites adjacent to the waterspaces and the boundaries of the conservation area is made the number one priority for action, together with “identifying opportunity sites within and adjacent to the Conservation Area (page 26). On a more positive note, may I say how pleased I am that page 26 also includes reference to “a two-way passenger boat service” and the need to replace the “diagrammatic maps” provided by British Waterways.

I end my letter with the following amendments to the draft document.

N.B. The twin-roofed former still house is mentioned on page 18

N.B. all the other representatives are small workshops

N.B. The “southern end of the River Lea” was either the main channel of the River Lea or one of its many braided channels. In either case, it probably flowed more or less alongside and at the same slightly falling height above sea level as Bow Creek, joining it in the vicinity of the bay downstream from the peninsula between the River Lea and Bow Creek. It is more than likely that by the thirteenth century the narrow spit of land between the western and eastern channels had been artificially raised or embanked, and the mouth of the western channel had been dammed to form a mill pond or head for the tide mills on the dam.

As well as the threatened listed two-storey buildings at 23 Gillender Street, there is also the threatened unlisted “four-storey” building. Hopefully, this will be locally listed and included in the final documents list of Locally Listed Buildings.

Finally, to end with reference to the section on opportunities and potential for enhancement. My view is that ‘landmarks’ are not appropriate nor needed anywhere in the proposed conservation area. The straight and hard-edged urban canal in its dramatic cutting, and the tidal Bow Creek (in and beyond the NE end of the conservation area) already have appropriate landmarks in the shape of their bridges, locks, historic buildings, and the one or two reasonably well-designed recent developments along the canal. However well-designed, ‘landmarks’ would in fact detract from the special character which the conservation area is intended to protect.