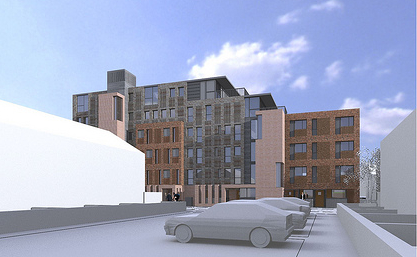 The above image from the Peabody website 20 October is an ‘artist’s representation’ of their proposed new development on the cleared site of the former Jewish Maternity Hospital.

It appears to show the north side of a six-storey block, which ‘will provide much needed affordable homes for local people while also commemorating a neglected piece of local history’.

The accompanying text states that, after the public consultation event on 7 November (see Campaign Newsletter No. 4), they will submit their planning application and demolish the existing buildings.

In fact, after the event on 7 November, Peabody are ‘proposing to begin demolition prior to the submission of the planning application‘ for their five- or six-storey replacement building (13 October letter from Peabody to Dr. Kadish).

Peabody can do this because they avoided the normal democratic process by applying for ‘prior notice of demolition’. They did this knowing that as an Environmental Impact Assessment (EIA) would not be required in this case, the proposed demolition would be what is called ‘permitted development’ and officers would simply have to give ‘prior approval of the method of demolition’.

The Council’s EIA officer issued a thorough Screening Opinion on 17 October, which concludes that an EIA was not required. But states that ‘The Council acknowledges that the buildings do represent a non-designated heritage asset in accordance with PPS5‘ (see second Open Letter to Owen Whalley October 12).

This was followed on 18 October by a delegated officer report, which concludes that prior approval is given subject to the demolition being carried out ‘in accordance with the submitted methodology’.

The report also mentions the receipt of 18 letters referring to the historical and townscape interest of the buildings. And requesting that the Local Planning Authority ‘should secure the retention of the existing buildings’.

TOWER HAMLETS HAS NOT GIVEN PEABODY PERMISSION TO DEMOLISH THE BUILDINGS: OFFICERS HAVE BEEN OBLIGED TO ACKNOWLEDGE THAT THE DEMOLITION AT 22-28 UNDERWOOD ROAD CONSTITUTES ‘PERMITTED DEVELOPMENT’ AND HAVE GIVEN ‘PRIOR APPROVAL OF THE METHOD OF DEMOLITION’.

PEABODY HAS STILL GOT TO SUBMIT A DEMOLITION NOTICE TO TOWER HAMLETS BUILDING CONTROL.

PEABODY COULD STILL DEMOLISH THE OTHER BUILDINGS AND LEAVE THE TWO ‘COTTAGES’ FOR CONVERSION TO FAMILY HOMES.

Please do your best to attend the Peabody consultation event at the Osmani Centre 7 November to demand the retention and conversion of the ‘cottages’ at 22 & 24 Underwood Road (see Campaign Newsletter No. 4 and latest Peabody web post.

Between now and 7 November, please sign and encourage others to sign the online petition and write to Peabody’s Chief Executive