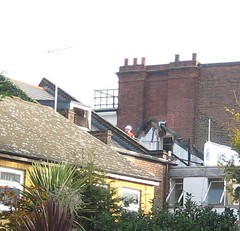 Despite a written assurance to Dr. Sharman Kadish that they would not start demolition before the public consultation on Monday 7 November, and without submitting a demolition notice to Tower Hamlets Council, Peabody’s contractors have started to demolish the oldest and most attractive of the two ‘cottages’. The entire roof and stepped gable have been removed and machines have started devouring the brick walls behind the scaffolded front walls.

It was obvious that Peabody was doing all in its power to stop any normal democratic ‘debate’ about keeping the two ‘cottages’. But their preemptive and deliberate destruction of the 1911 ‘cottage’ at 24 Underwood Road is an insult to the people of Tower Hamlets and to the memory of all the people associated with the former Jewish Maternity Hospital.

The 1911 ‘cottage’ has lasted 100 years and would have lasted another 100 years, but Peabody has chosen to destroy this attractive and unique little building in the very year of its onehundredth anniversary.

Clearly, Peabody intends by this appalling and illegal act of gross cultural vandalism to make sure that there will be little or no point in our trying to save the ‘cottages’ at their public consultation on Monday 7 November.

However, thanks to Mayor Rahman and Councillors from all four political groups, Owen Whalley wrote to Peabody on 3 November urging them to stop demolition. Peabody’s contractors have stopped work but will resume after Monday 7 November. They will not say when that will be but we suspect that it could be by the end of next week.

We must, therefore, fight on to save the ‘cottages’. Nearly six hundred people have now signed the online petition to keep the two ‘cottages’ and we will present this petition to Peabody on Monday 7 November at about 5.30 pm. Arrangements are also being made for us to present the petition to a full meeting of Tower Hamlets Council on 29 November 2011.

So, even after 7 November, please sign and encourage others to sign the petition for presentation to the Council on 29 November (www.residents-first.co.uk).

Our thanks to all those who have already signed the petition, especially Sir Arnold Wesker (born JMH 1932) and Councillors from all four political groups. Our thanks also to those who have written to Peabody, especially Dr. Sharman Kadish, Director of Jewish Heritage UK; the chairs of the East London History Society and the Jewish East End Celebration Society; Tower Hamlets Councillor Bill Turner, the Secretary of SAVE Britain’s Heritage; and Tower Hamlets Councillor Rabina Khan (Lead Member for Housing).

Please do your best to attend the consultation event at the Osmani Centre, Underwood Road, E1, on Monday 7 November from 3 pm to 7 pm to register your strong support for the retention and conversion of the ‘cottages’ at 22 & 24 Underwood Road: