The Peabody public consultation event at the Osmani Centre on 7 November was well attended by members of the Campaign seeking to save the two ‘cottages’ at the former Jewish Maternity Hospital in Underwood Road. Dr. Sharman Kadish, the Director of Jewish Heritage UK, came all the way from Manchester. Other attendees included Cllr Rabina Khan (Lead Member for Housing) and Cllr. Alibor Choudhury, also Cllrs. Bill Turner and Joshua Peck. 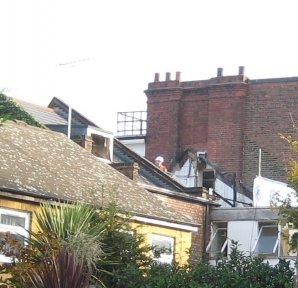 We were also very pleased to meet 86-year-old Stanley Fox from Wembley, who was born in the Jewish Maternity Hospital and has played a key role in the campaign to save the two ‘cottages’. Mr. Fox and local residents Brenda Daley and Melissa Parker, in the presence of Cllrs. Khan and Choudhury, presented our petition to Matthew Bird of Peabody. In addition to online signatures, many local residents and others at the event signed our petition, which now has just over 600 signatures.

The demolition contractors were on hand to apologise for starting the demolition before getting clearance from Tower Hamlets Building Control (see Campaign Newsletter 6). It was put to them that, as Angela Brady was going back to the drawing board, it would be helpful for the demolition contractors to leave the ‘cottages’ when they resume demolition. They agreed to do this subject to direction by their client, Peabody Housing. Unfortunately, the officers present were reluctant to give a firm commitment in these matters.

Not surprisingly, Peabody have selected references from English Heritage’s letter of 23 April 2010 which justify their demolition of the only former Jewish maternity hospital in England. Perhaps under Angela Brady’s guidance, they will re-read the letter and find the following statement: “The building (22-28 Underwood Road) has a claim to historic interest, as one of the few surviving buildings relating to the work of Alice Model and as a rare Jewish welfare building in London’s East End.” (see Campaign Newsletter No. 7).

The Campaign also thinks that now that the Council has recognised that the buildings “represent a non-designated heritage asset in accordance with PPS5”, Owen Whalley, Head of Planning, should be instructing Peabody to respect the four heritage assets on Underwood Road and include them in a revised proposed residential redevelopment, as required in the Council’s 2008 planning statement for 22-28 Underwood Road.