Following the unanimous decision by Councillors at the Tower Hamlets Council meeting on 29 November 2011 (press release 30 November), Cllr. Rabina Khan wrote to Peabody’s Chief Executive, Stephen Howlett. She informed him of the decision and pointed out that the cottages were now non-designated heritage assets and, in accordance with PPS5, her officers had a duty to protect them. Peabody should, therefore, alter their Option 3 plans so that each cottage is converted to a family home.

In his reply of 5 December 2011, Stephen Howlett acknowledged that the buildings had recently been given the status of non-designated heritage assets but failed to “see how the position 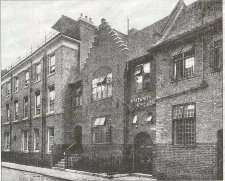 has changed”. He then referred to the English Heritage decision not to list the buildings and clearly thinks that this means that they can be demolished, regardless of their new status.

He must stop using the 2010 refusal to list as a justification for demolition and accept the fact that English Heritage described the former Jewish Maternity Hospital as a “rare Jewish welfare building in London’s East End“. Also that the Council’s 17 October 2011 recognition of the buildings as “non-designated heritage assets in accordance with PPS5” means that their retention is now a material consideration in planning terms. And that Peabody has a responsibility to at least retain and convert the two cottages.

On 8 December, campaign representatives met with one of the Mayor’s advisors. And on 12 December, Lord Janner of Braunstone QC wrote to Stephen Howlett saying that he would be grateful to know that the cottages have been saved. We understand that Lord Janner fully supports the campaign and is working to help achieve its aims.

Dr. Sharman Kadish, the Director of Jewish Heritage UK, wrote to Stephen Howlett on 14 December with a copy of a letter from the Minister for Tourism and Heritage. John Penrose MP suggested “engagement between the Campaign, Tower Hamlets Council and the developers, Peabody Housing Trust, for an amicable settlement”. Dr. Kadish suggested to Stephen Howlett that we take this advice and reach a settlement.

On 16 December, Tom Ridge wrote to Stephen Howlett on behalf of the 760 or so signatories to the Campaign’s petition, formally requesting that he meet with campaign representatives and Tower Hamlets Council, as soon as possible.

Later the same day, we received an email from Tower Hamlets Head of Planning, Owen Whalley, saying that he had written to Peabody asking for a meeting “to further discuss the retention of the cottages”, and that Stephen Howlett had agreed to meet and a date is being finalised.