Having restarted work in the first week of January 2012, Peabody’s demolition contractors completed the demolition of the 1911 cottage at 24 Underwood Road on Friday 13 January 2012. 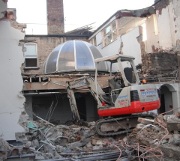 No amount of commemoration by Peabody will compensate for this shocking and needless destruction of a little building which meant so much to so many people. And as an affordable family home would have been a living memorial to a unique maternity hospital.

There are now only two historic Jewish welfare buildings which stand testament to that extraordinary outburst of vitality and creativity known as the Jewish East End. But the old people’s home in Mile End Road and the soup kitchen for the Jewish Poor in Spitalfields are relatively unknown and unloved buildings, compared to the pride of place which was embodied in the name “Mother Levy’s”.

The name and the remarkable history of the unique hospital run by women for women will live on in the history books about the East End but as built evidence and a living memorial for future generations to understand and appreciate the Jewish East End, and the East End as an historic point of arrival for migrants from Europe and indeed the whole World, Mother Levy’s is dead.
All the buildings at the former hospital are being demolished by Peabody, aided and abetted by officers in Tower Hamlets Council but against the  unanimous wishes of its elected Councillors.

All four hospital buildings on Underwood Road could and should have been adapted for residential use (with the utilitarian buildings at the back replaced by new homes). We began the campaign with this proposal but discovered that Peabody’s architects had already drawn up their plans for new buildings on the site of the former Jewish Maternity Hospital, which Peabody had purchased from Tower Hamlets Council in March 2011.

It was at this point that Dr Sharman Kaddish, as director of Jewish Heritage UK, made her compromise proposal for the retention of the two cottages and their conversion to family homes. 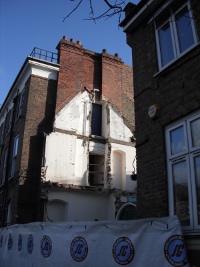 Our petition to Peabody was based on this proposal and signed by about 760 people, including Arnold Wesker and former MP Mildred Gordon and councillors from all four political groups on Tower Hamlets Council. Dozens of letters were written to Peabody’s Chief Executive, Stephen Howlett. They included letters from the chairs of the Jewish East End Celebration Society and the East London History Society, Cllr Rabina Khan, and Cllr Bill Turner, the secretary of SAVE Britain’s Heritage and Lord Janner of Braunstone QC.
Councillor Rabina Khan as lead member for Housing arranged meetings with Owen Whalley, Head of Planning in Tower Hamlets. At the full council meeting on 29 November 2011, Cllr Judith Gardiner proposed the Labour group’s motion calling on the Mayor to negotiate with Peabody, and Peabody to spare the cottages. The motion noted that Peabody has a duty to optimise the amount of housing it provides but also to protect the borough’s heritage. Cllr Peter Golds, Leader of the Conservative group, spoke in support.

John Penrose MP, Minister for Tourism and Heritage recommended engagement between the Campaign, Council and Peabody for an amicable settlement to keep the two cottages.

But Peabody was unmoved and in demolishing the oldest and most attractive part of the former hospital Peabody has committed the gross act of cultural vandalism which we all tried to prevent.

Tower Hamlets Council has the highest housing target in London and unless it formally identifies all its unlisted buildings which are heritage assets; and insists on their retention and adaptation by developers and housing associations, the borough will go on losing historical buildings capable of re-use. It is said that the Council has a list of 600 planned building sites for new housing. Most of the 600 sites will have existing buildings and doubtless many of them are unlisted buildings of some architectural and/or historic interest.

Although none of them are likely to have been loved as much as Mother Levy’s, her tragic death must signal a new start for Tower Hamlets.
The former Jewish Maternity Hospital was one of the very few redundant council buildings actually sold by Tower Hamlets Council.

Had the 2008 Planning Statement for the redevelopment of the former hospital been made available for public comment, an altogether more transparent process may well have resulted in the retention and adaptation of the two cottages.

Several years ago, Planning Statements for three redundant Tower Hamlets Council buildings were made available for public comment. As a matter of extreme urgency, all present and future council disposals must be subject to the same good practice. And as an integral part of this process, the Council must draw up a list of all unlisted heritage assets for retention and adaptation.