This application is going to Committee with LBTH planing officers recommendation for approval. This decision seems to indicate (as some of us suspected already) that some LBTH planers live in a bizarre Nania type land accessed through the back of a plan chest on the 5th floor of Anchorage House.

Along with concerns expressed by CABE, English Heritage, Twentieth Century Society, GLA and local residents groups (Millennium Green Trust, All Saints Church and Poplar Mosque & Community Centre) Thames Gateway Development Corporation officers are recommending that the portion of the Blackwall Reach development they are responsible for as the planing authority be refused. This is what they say….. 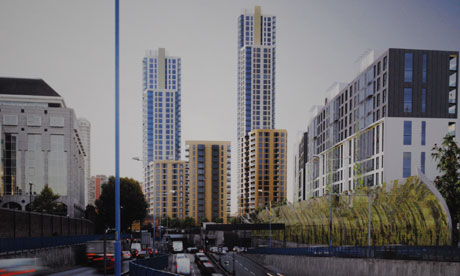 ….the proposal does not presently comply with the London Plan……. The principle of development at this density is not justified in terms of creating a sustainable community……

The application indicates that Preston’s Road roundabout is currently operating at capacity and will be over capacity in future years as a result of this and other developments in the area. The report also suggests that Poplar High Street east will be very close to capacity.

In terms of the overall masterplan, CABE consider that there is a lack of clear logic in defining building blocks, spaces and routes. There are concerns that the open spaces will be fractured and overshadowed by the taller buildings and that the north-south route through the site could be detrimental to the quality of Cotton Street.

We recommend that the Council seek amendments with regard to the scale and form of Blocks A1, B, C1, O and N and that additional detail is obtained at this stage, particularly with regard to these aspects of the development.

Re Woolmore School (to be demolished) – Despite the replacement fenestration, we consider main neo-Georgian part of this building makes a positive contribution to the townscape, and urge Tower Hamlets Planning Authority to reject plans incorporating its demolition

So why are the unelected officers in Tower Hamlets so keen to get this through…..

This application was only submitted in January 2012 and LBTH, the applicants along with the HCA, have been pushing this through at speed in order to hopefully gain a positive recommendation prior to the introduction of the Mayor Boris’s Community Infrastructure Levy (CIL) to help fund Crossrail. This new charge will be collected by the borough and is set at £35 per square metre of any new development.

10.1 This report has outlined all material planning considerations associated with this development and has focused on the area for determination by the Corporation. It is recognised that the delivery of affordable housing is a priority for the Borough and that this site is identified as a location for the delivery of housing led redevelopment. However, having balanced these local needs against the quality of accommodation being delivered, officers can draw no other conclusion other than that at the time of completing this report the scheme will not deliver adequate standards of residential amenity in the Blocks located in the Corporation’s Planning Functions Area. Specifically, and on the information provided in the application information and independent reviews, it is considered that Blocks J, K, M, N, P, O and Q will receive insufficient levels of daylight to be considered acceptable. Much emphasis has been placed on the detailed design of these development blocks, particularly through the controls within the Design Code. With this in mind, Members requested at the Committee Meeting of the 8th of March that it be demonstrated that it is possible to rectify the failures shown at outline stage in the detailed design at reserved matters stage. At the time of writing, no further information has been provided.

The proposal, by virtue of the inadequate levels of daylight and sunlight to blocks J, K, M, N, O, P, and Q, is considered to result in a substandard level of residential amenity to future occupiers and is therefore contrary to policy 7.7 of the London Plan 2011, policies DEV1 and DEV27 of the London Borough of Tower Hamlets Interim Planning Guidance (2007) for the purposes of development control, policy DM25 of the London Borough of Tower Hamlets Managing Development Plan Document (proposed submission version January 2012).

At about 1 pm on Thursday, 8 March 2012, I was informed that item 7.3 (Bow Wharf) had been withdrawn from the 8 March meeting of the Development Committee.

Nevertheless, we decided not to cancel our attendance at the meeting and 12 of us were there to hear the Chair state (without reasons) that item 7.3 had been withdrawn.

You will recall that my 29 November 2011 letter of objection included concerns about the serious inadequacy of the existing fire route from Grove Road to the western part of Bow Wharf. I understand that comments from the London Fire Authority were received by the Council on Tuesday 6 March, and I suspect it was the failure of last-minute efforts to make any necessary alterations that led to the last-minute withdrawal of item 7.3.

The application may go for determination at the next Development Committee meeting on 5 April 2012. So please keep a look out for the next Bow Wharf Newsflash and do your very best to attend and encourage others to do the same. Believe me, it really does make a difference. Next time will be decisive and we need 50 people to fill the public gallery.

It would also help for local residents near Bow Wharf to convey your concerns to your local councillors. One of dozens of issues is the ridiculously small consultation area – see online Development Committee agenda 8 March 2012.

Others issues concern the listed Stop Lock Bridge, for which there are two separate Listed Building Applications. As the proposed replacement water pipe on the east side of the bridge will no doubt be supplying water to the new homes on Bow Wharf, British Waterways should be removing it from the listed bridge and putting in a new water pipe from Grove Road or Wellington Road.

So much confusion now surrounds the H2O alterations to the bridge and its associated walls, the application (PA/11/03373) should be withdrawn and replaced by a more sympathetic set of proposals. And the new application should be determined as a separate item at the same meeting and after the determination of the H2O application for residential development.

The applications are going to the Development Committee on THURSDAY 8 MARCH with a recommendation to grant planning permission (item 7.3 PDF)

My 8-page letter of objection on behalf of EEWG has been reduced to a 6-line paragraph. And its points have either been passed over or inadequately addressed. For example, my concerns about the serious inadequacy of the existing fire route from Grove Road have
been ignored and the fire authority has not yet commented on the application.

I have asked to speak for 3 minutes, but there needs to be a good number of concerned residents in the public gallery for the committee members to defer or refuse the application. A leaflet is going out to residents on or near the canals this weekend.

Could you and others please come along. The meeting is at the Town Hall, Mulberry Place, and starts at 7 pm. But we need to be in the foyer at 6.30 pm to sign in and go up to Council chamber as a group.

It would also help if you could convey your concerns to your local councillors.

TFL would like your views on a package of proposed new Thames crossings in east and southeast London, which includes:

“will be completed within a decade” he also argued for further investment in “a package of new river crossings for the east of the capital,” to “address existing congestion problems” and “enable future growth.”

Environmentalists have hit out at the plans to build a new road crossing. Friends of the Earth’s London Campaigner Jenny Bates said

“A new road tunnel and car ferry will bring misery to Londoners by creating more noise, more traffic and more pollution. If Boris Johnson wants to keep his pledge to make London the world’s greenest capital his transport policy needs to go in a different direction.”

What will the affect on Tower Hamlets be in future with even more traffic passing through our borough.

Why can’t Cross Rail take the strain. Park and ride from Plumstead to the City and Canary Wharf? Maybe not as Boris will not want to upset his voters in Bexley.