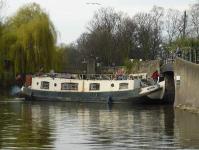 The London Fire Authority has tested a new fire engine route from the Grove Road car park, via the archway and the covered way alongside the former warehouse, to the application site at the western end of Bow Wharf.  Whilst the fire engine was able to negotiate this route, it took too long.  The Fire Authority has therefore issued a formal complaint and the applicants have been given the opportunity to address the problem.

They are likely to be presenting a solution in the very near future.  We therefore have a last chance to write more letters of objection, as soon as possible.

It has been pointed out to me that whilst I have written on behalf of EEWG, my letter(s) only count as one objection.  The Greater London Industrial Archaeology Society has recently written again to restate its objections to block B.

Whilst the application is likely to go to the Development Committee (having been withdrawn in March 2012) we need as many letters as possible, restating our objections to blocks A, B and C.

Please use my short restatement for objection (PDF download) on behalf of EEWG as a basis for your personal letter of objection.  The same form of words must be used to ensure that your letter is treated as a material planning consideration.  Cllr. Amy Whitelock is taking a strong interest in this case and has been told by planners that amenity issues raised by residents on the west bank of the Regent’s Canal are not “material planning considerations” as their properties are over 18 metres away from Bow Wharf.

Please send copies of your personal letter of objection (with PA numbers) to EEWG, and to all the Councillors in Bow West and Mile End & Globe Town, and all the Waterway Champions.

See self-explanatory EEWG letter (PDF Download) about a proposed Bellway development which includes the Limehouse Accumulator Tower.  GLIAS has also written, but we need at least 18 other letters of objection by 6 June to ensure that this application is determined by a committee of councillors.

Again, please send copies to EEWG, and to all the Councillors in Limehouse and all the Waterway Champions.

Network Rail has appealed against the Council’s refusal to grant planning permission for a speculative student hostel on the site of the redundant coal drop viaduct between the QMUL campus and the mainline railway from Liverpool Street.  The viaduct with its 25 arches is well seen from the Regent’s Canal and is featured on my forthcoming East End Waterway Guide.

We must try to persuade the Inspector to refuse the application so that a new application would include the retention of at least 5 arches near the canal.  I have to write an EEWG letter by 7 June.  GLIAS has already written about the viaduct’s historic significance (as the only surviving example of its particular type in London).  I will try and get my letter written asap and send it you in the next newsflash.