Since sending your copy with the 3 June 2012 Newsflash, I have been making various amendments.  My apologies for this, but I was over-keen to have the guide available before the Olympics; and I also had to send a copy to the Planning Inspectorate as part of my “additional comments”.  These had to be in by 7 June 2012 in connection with British Rail’s appeal against Tower Hamlets Council refusal to grant planning permission for the demolition of the COAL-DROP VIADUCT at Mile End (see the section on Regent’s Canal in the waterway guide, and my letter on behalf of EEWG, both attached to the 3 June 2012 Newsflash), and its replacement by a speculative student hostel.

From 1 October 2012, Fish Island and adjoining parts of Bow and Bromley-by-Bow will come under the LONDON
LEGACY DEVELOPMENT CORPORATION, as the local planning authority. Tower Hamlets Council is aiming to have its FIAAP approved by the Planning Inspectorate in September.  To achieve this, a public examination by an Inspector started on 18 July and will end on 25 July 2012, with the Inspector’s report due in September.  The January 2012 Newsflash included a copy of my FIAAP submission on behalf of the East End Waterway Group.  The submission stated that the action plan is unsound on the grounds of ineffective heritage planning and will remain so until: 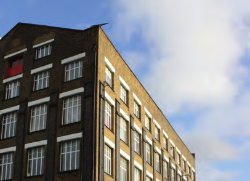 As comments have to be made by 5 pm on 30 July 2012, I have commented on behalf of EEWG.  A copy is attached (see links below). Although I have responded on behalf of the Group it would be a great help should others also email their comments and support for the Group’s qualified welcome for the over-due designated of a White Post Lane CA ([email protected]).

During the first session of the public examination on 18 July 2012 I had to assure the Inspector that my EEWG comments would be made by the 30 July deadline.

I am also in the programme for the afternoon session on 24 July.

In addition to my written EEWG comments I will be meeting the author of the draft appraisal on 23 July 2012.

Local residents, schools, community groups, amenity societies and
businesses working with British Waterways, Tower Hamlets Council and
others for the protection and beneficial use of the six mile waterway
‘ring’, its historic buildings, structures and habitats.
Share