Last Autumn we sent out a news flash with the Inspector’s 26th October decision to dismiss an appeal against the Councils refusal to grant planning permission for two three story houses at Bridge Wharf, Old Ford Road.

Despite this, or as a direct result, there is now another application for development on this protected open space. My own view is that in light of the Inspectors decision should not have been validated by the planners. (See application here)

The attached letter of objection has been written on behalf of the EEWG. As always, their has to bee at least 20 objections for the application to be determined by a committee of Councilors rather than planners acting under delegated powers.

We really need more than 20 to make sure that the application is refused with sufficiently robust reasons to guard against another appeal.

Please send your individual objections, with reference to the character and appearance of the two conservation areas to Mumtaz Shaikh ([email protected]) as soon as possible and ideally before 28th August 2012. This is the deadline for for comments but as a rule they are accepted after that date. Even so, please do your best 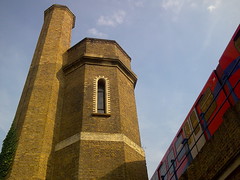 Can you please attend the Developement Committee meeting at the Town Hall tomorrow at 7.00 pm. To suport the limiting of the  proposed Bellway development which includes the Limehouse Accumulator Tower.

By way of explanation see below an email to our patron Jim Fitzpatrick MP.

A copy of our letter 28 May 2012 was sent to you and the waterway champions. I attach a copy for your information. The EEWG is not objecting to the development but like GLIAS, thinks that proposed block C should be reduced to 4 storeys and that the railway arch in front of the Hydraulic Accumulator Tower must be safe guarded for use and access in connection with the publicly accessible tower.