Campaign to keep the public shelter & re-open the kiosk

Campaign to keep the public shelter & re-open the kiosk 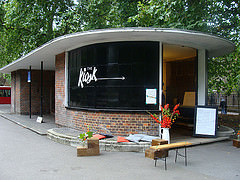 At least 50 objections have been made against Council’s own application to convert the public shelter to a private cafe; and only 10 letters have been sent in favour. However, there is a petition in favour of the application which has been signed by about 150 people, mostly using the pop-up cafe.

More objections can and must please be made to convince the councillors on the development committee (date to be announced) that it would be wrong to make damaging alterations to a unique building and deny residents the use of what is now the only public shelter in Bethnal Green Gardens (and Museum Gardens).

The attached standard letter of objection (used by most of the 50 objectors) and the attached ‘update’ (about closed toilet block in Museum Gardens and the public shelter in Bethnal Green Gardens) were both written before I saw inside the kiosk at the south end of the building. The kiosk has a wonderful interior with original teak benches and tiled walls – all to be ripped out in the Council plans to make way for a kitchen and a disabled wc. Recent research has also established that whilst the Art Deco public shelter was probably designed ca.1939, it was not built until 1950-51; and that the planned sunshelter was, in fact, used in the 1950s as a kiosk for the sale of icecream and/or tea. Asset management will shortly be starting the process for the closed toilet block using the plans drawn up by the Council’s architects and approved under delegated powers, in October 2013.

Before emailing the standard letter of objection or emailing your own objections, please read the attached update about the closed toilet block in Museum Gardens and the public shelter in Bethnal Green Gardens.

We must also encourage the parks department to consider other options for:

As you may know from recent emails, the meeting to be organised by the Council “should be in early December”. I hope to propose the re-opening of the kiosk etc. at this meeting and hope that my proposal will be sufficiently well supported to encourage the parks department to think again about the Art Deco public shelter in Bethnal Green Gardens.