Despite extending the ‘industrial’ conservation areas in Hackney Wick (LB Hackney) and Fish Island (LB Tower Hamlets) and identifying industrial buildings and structures both inside and outside the conservation areas as non-designated heritage assets, the LONDON LEGACY DEVELOPMENT CORPORATION is implementing its Local Plan 2015-2031 policy to restore and reuse buildings of heritage value for employment uses by allowing developers to either demolish such buildings or, at best, keep a few original outer walls as decoration for an oversized replacement building.

An application to simply retain two outer walls of an Edwardian multi-storey stable block at Swan Wharf, Dace Road, London E3 attracted over seventy individual objections, including representations from English Heritage, The Victorian Society, East End Waterway Group, Greater London Industrial Archaeology Society, The Hackney Wick and Fish Island Planning and Development Unit, The East End Preservation Society, Heritage of London Trust, SAVE Britain’s Heritage. Also 1,041 signatures to an online petition (see below). The Legacy Corporation postponed the determination of the application to discuss amendments with the applicant. The main amendment now being consulted on is the reduction of the proposed oversized replacement block from six to five storeys.

Both the Legacy Corporation and the applicant are ignoring all the objections and the strong advice from English Heritage. And the LLDC’s Fish Island & White Post Lane CA Character Appraisal and Management Guidelines (adopted by the Board in April 2014, final version November 2014). And the LLDC’s Local Plan 2015-2031 (submitted to Secretary of State November 2014). They are also ignoring all other relevant planning policies: National Planning Policy Framework, London Plan, LBTH Core Strategy and LBTH Fish Island Area Action Plan.

Obviously, should planning application 14/00262/FUL be given planning permission by the LLDC’s Planning Committee (at its February 2015 meeting?) and the proposed demolitions in Wallis Road Hackney Wick are allowed, precedents would be set for the demolition of substantial demolition of all the other non-designated heritage assets (unlisted buildings) in and outside the LLDC’s four conservation areas. In which case, the designation of the two extended conservation areas and all the LLDC’s planning policy documents would have been a complete waste of time, effort and money. And the people of London (Tower Hamlets and Hackney in particular) would not only lose the one really substantial remaining historic area of the Lower Lea Valley (which was London’s largest industrial area when London was the world’s largest industrial city and greatest port) but also the social and economic benefits of properly retaining and reusing its representative buildings.

The on-line petition objecting to planning application 14/0262/FUL has so far been signed by 1041 people.

If you haven’t already signed, please do so as soon as possible and encourage others to sign.

The petition will be kept open until the day the application goes tot he LLDC Planning Committee. 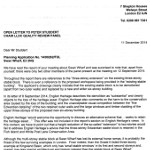 Letter of Objection from EEWG re proposed demolitions of heritage assets in Wallis Road.

As this will only count as one objection, please send your own objection and encourage others to do so as soon as possible. The consultation period ended in December 2014, but objections will still be received by the LLDC until the application goes to the LLDC Planning Committee.

All you have to do is put your full postal address on the letter and make the few changes necessary so that the email letter is from you.

Thank you for the opportunity to comment on the amended details.  The proposed retention of the stable block’s north-side wall and west-end wall does not constitute the “redevelopment and retention of the heritage asset” (Revised Planning Statement p.36).  The applicant is still seeking planning permission to substantially demolish the non-designated heritage asset and replace it with a wider five-storey building, instead of a six-storey building.  The deception that the heritage asset is to be kept and reused is maintained by references to “partial demolition” and “extensions above” (LLDC description of proposal); references to “stable block core” and “main stable block” (Revised Planning Statement p.4); and references to “stable block extension” (Design and Access Addendum Report 4.2.04).

EEWG’s first letter of objection (26 August 2014) explains how the NPPF, London Plan, LBTH Core Strategy and Fish Island Area Action Plan would be contravened by the proposal to simply retain two outer walls of the heritage asset.  The proposal would also contravene the LLDC Local Plan 2015-2013 (submitted 21 November 2014 to the Secretary of State with minor amendments and corrections).  Whilst it has still to be examined in public and adopted, the Local Plan is clearly an emerging plan and is, therefore, a material consideration in the determination of this application.  We refer specifically to Local Plan “Policy 1.1.3 Restore and reuse buildings of heritage value for employment uses”.

The proposal would also have a detrimental impact on the Dace Road Cluster, which forms “a coherent and complementary group of medium to high heritage significance” (Fish Island & White Post Lane Conservation Area Character Appraisal and Management Guidelines, final version November 2014 p.23).  Medium to high significance means that the Dace Road Cluster of non-designated heritage assets, which includes the asset at Swan Wharf, has been assessed at the regional to national level of significance.  It is the only group of non-designated heritage assets (in both conservation areas) to have been assessed by the LLDC, as required by NPPF Section 129.  However, this assessment at just below the highest possible level of assessment has been overlooked in pre-application and subsequent discussions.  Clearly, the significance of the Dace Road Cluster and its constituent heritage asset at Swan Wharf would be substantially harmed by the proposed development at Swan Wharf; and NPPF Section 134 requires the Legacy Corporation to make a “balanced judgment”, which, in this case, can only result in refusal.  Especially as the proposed development would also cause substantial harm or loss to the designated heritage asset, namely the Fish Island & White Post Lane Conservation Area.  And, it has not been “demonstrated that the substantial harm or loss is necessary to achieve substantial benefits that outweigh the harm or loss (NPPF Section 133).  Nor do this Section’s four alternative requirements apply:

The proposed reduction in the height of the replacement block from six to five storeys utterly fails to address English Heritage’s advice that the three-storey Edwardian stable block is retained in the Fish Island & White Post Lane Conservation Area.  We note the deliberate omission of any reference to English Heritage’s letter of 8 September 2014 in Section 2 of the Design and Access Addendum Report. English Heritage describes the demolition as “substantial” and clearly objects to the loss of the heritage asset and the harm to the conservation area caused by this loss.  English Heritage also refers to the unacceptable visual competition between the “fine Edwardian detailing” of the two retained outer walls and the large windows and timber cladding of the upper three storeys (now two) of the proposed new six-storey building (now five).

For all the reasons set out in this third letter of objection and our earlier letters of objection of 26 August and 8 September 2014 and for all the reasons set out in the online petition (currently signed by 1041 people), East End Waterway Group objects to Planning Application 14/00262/FUL and expects this application to be refused by the LLDC Planning Committee; and the applicant encouraged to take up English Heritage’s offer “to discuss an alternative scheme that … seeks to retain the heritage asset…”.

For and on behalf of the East End Waterway Group

Would organisations and individuals who have already objected to 14/00262/FUL please write to LLDC stating that you have studied the amended details and wish to confirm your existing objections. Please do this by the end of the consultation period, 21 January 2015

Would organisations and individuals with media contacts please send this newsletter/press release with your endorsements, and let us know.