In November 2015, the Victorian Society applied for the former hospital to be listed. The following month, Historic England received an application, on behalf of Circle Housing and Crest Nicholson, for a Certificate of Immunity from Listing. Both applications were considered by HE but the second application was paid for by the applicant under HE’s enhanced Advisory Services.

In March 2016, a consultation report was issued by Historic England and the following month the main building (1855), south wing (1865) and octagonal sanitation tower (1890–2) were listed Grade II. The former hospital is also a named building in the Victoria Park Conservation Area.

At the developer’s second public exhibition (in June 2016), local residents and others were informed that Historic England is now “supporting” the proposed loss of the listed south wing, together with proposed “heritage enhancements” as set out in full on page 4 of the June exhibition document on the developer’s website (see also page 3 for a view of the reinstated and enhanced sanitation tower). 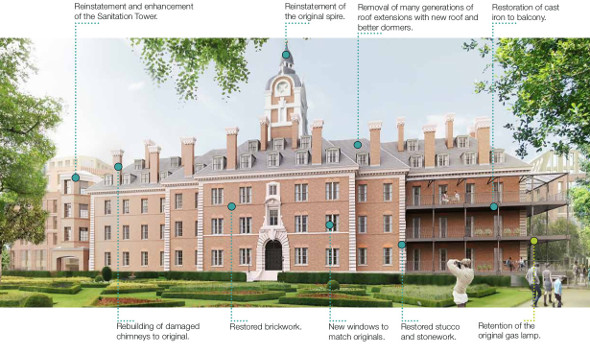 Circle Housing and Crest Nicholson hope to submit their planning application to Tower Hamlets Council towards the end of this year. By this stage it is usually too late for local residents and others to suggest any significant changes. As a local historian who responded in detail to the HE consultation, I am appalled by Historic England’s ‘protect and destroy’ approach to our built heritage.

Mindful of the fact that the redevelopment would deliver “up to 395 homes including affordable homes” I regret but accept the loss of the south wing. I also understand the new build alongside the corridors at the back of the narrow main building but regard the proposed “new roof and better dormers” as totally unacceptable.

Most of the several original roof structures survived WW2 damage and the “many generations of roof extensions” were probably internal alterations to increase the number of attic bedrooms for nurses. The integrity of this listed building requires the retention and repair of the existing roof and dormers. And the proposed back addition should have an honest flat roof not a long roof slope as part of the proposed new “double height” roof (which is double the existing width to maximise the number of one-bed attic room flats).

The rebuilding of the top part of the central tower in the 1930s is also part of the historic building’s history and it should not suffer the proposed “reinstatement of the original spire”, which would be an unnecessary and misleading replica.

The three-storey octagonal sanitation tower is to be altered out of all recognition. Its rectangular base, or ground storey 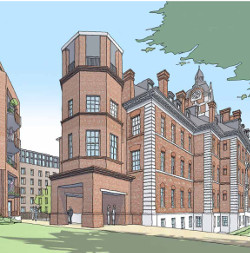 made into a crude arcade and an octagonal gazebo built on top with a low octagonal roof to mimic the original octagonal roof (the structure of which survived WW2 damage but was subsequently removed). The three-storey tower was mainly added to provide additional and better ventilated WCs for the patients in the wards on the first and second floors of the original three-storey hospital building. Its so-called enhancements are designed solely to match the new buildings and create a link between the old building and the proposed new blocks of flats, as seen in the drawing on page of 3 the June exhibition document on the developer’s website. (see image on right)

English Heritage used to promote a conservation-led approach but it would appear from the “heritage enhancements” set out on page 4 of the document that Historic England favours the replacement rather than the repair of worn or damaged historic fabric, especially when it is considered necessary for an old building to look as new as the new buildings in a speculative residential development.

However, we must concentrate on trying to save the roof and the dormers and the two towers. It is not too late for the developers to change their plans before submission. Would residents and others please, therefore, email your concerns and requests as soon as possible to [email protected] with copies to